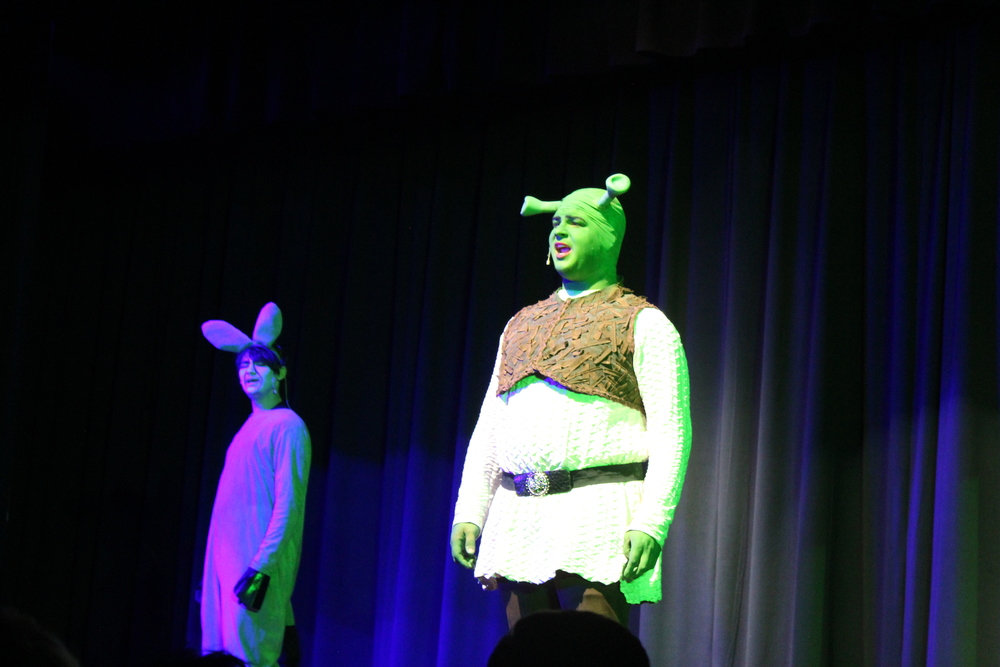 Last week I attended  Shrek The Musical. As I watched it I was pleasantly surprised by the set design and performances.

Zack Ottemann (Shrek) really gave himself to the performance. His acting and singing brought the character to the stage. Alex Horcasitas (Fiona) put a lot of her emotions into her character. She put her whole self into the character,  creating emotion with the songs she sang. Marcus Bartman (Donkey) fit the role of comedic relief really well. He added that bounciness that completely makes the character. Of course, this wouldn’t be a real review without also mentioning the performance Kaylee Manion (Dragon) put on, along with the puppeteers. Her voice made the crowd go wild and added a whole new feeling to the performance. For such a small musical, and school, the puppet and puppeteering was impressive and helped bring characters where normal people couldn’t. The rest of the cast made for interesting characters and helped the feel of the musical be more comedic and entertaining.

Sometimes the vocals could be hard to hear but overall the songs and pieces were easy to get into. As expected, the leads brought a lot to the table and threw a lot of themselves into the music. Like I’ve said before, the musical was impressive for a small town. Overall, it was entertaining and the comedic moments hit well with the crowd. It was definitely a good ending for the seniors to leave on.

“It went well, there were a few bumps along the way, but by the time we hit the stage we readied up and did our best,”  said Zachary Ottemann (Shrek).